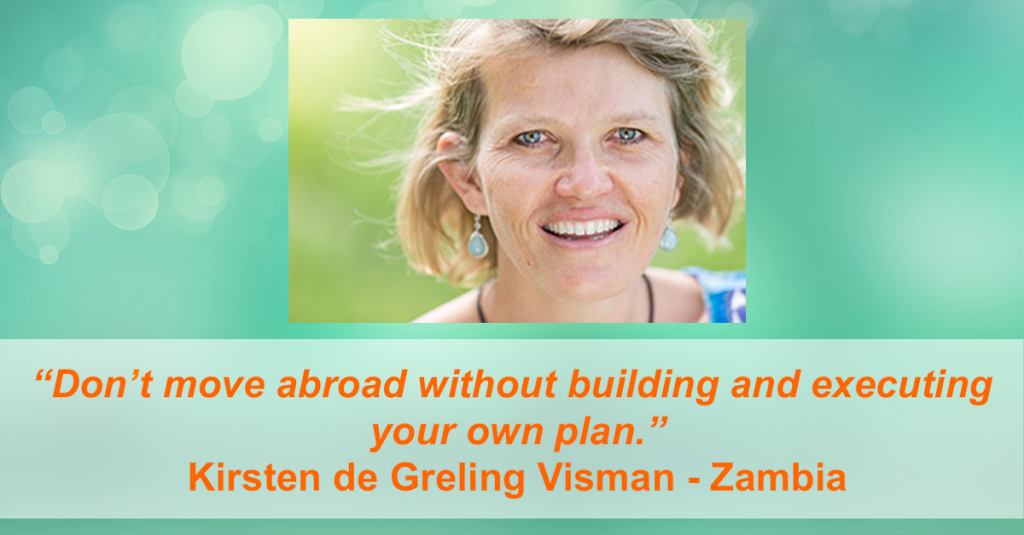 Kirsten de Greling-Visman is Dutch Canadian raised as an expat child across the Netherlands, Canada, the Dutch Antilles, the US, France and Spain. Kirsten then settled and built her career in the Netherlands as a program manager and career advisor in Universities. In 2007, although she was offered three major positions by various universities, she took the decision to leave her promising career to join her French-finish fiancé who was sent to Albania for his job. Since then they had 2 boys and have been moving across Africa to Cameroon, Burkina Faso and now they live in Zambia.

While moving from a country to another, Kirsten has been able to take few job assignments but also trained to become a certified coach. Today she is a career coach, helping expat partners redefine their identity, rediscover their passion and reconnect to a life and career they love.

Share this:
← TN40: Giving birth abroad with Karen Wilmot, the Virtual Midwife.TN42: What to know about your expat package and taxes abroad. →

Great Podcast! It's been my companion in my walks

05/12/2021
I'm so glad I connected to Amel. (Actually she connected to me :D ) thank you Amel for this valuable podcast. I'm new in entrepreneurship and this podcast has been helping me take actions in my business and I'm witnessing its impact already, just from her podcast episodes. Highly recommended for every entrepreneur looking to better Marketing strategies and growth. I now feel more confident in tackling my marketing strategy and I love love how practical it is with the workbooks too.