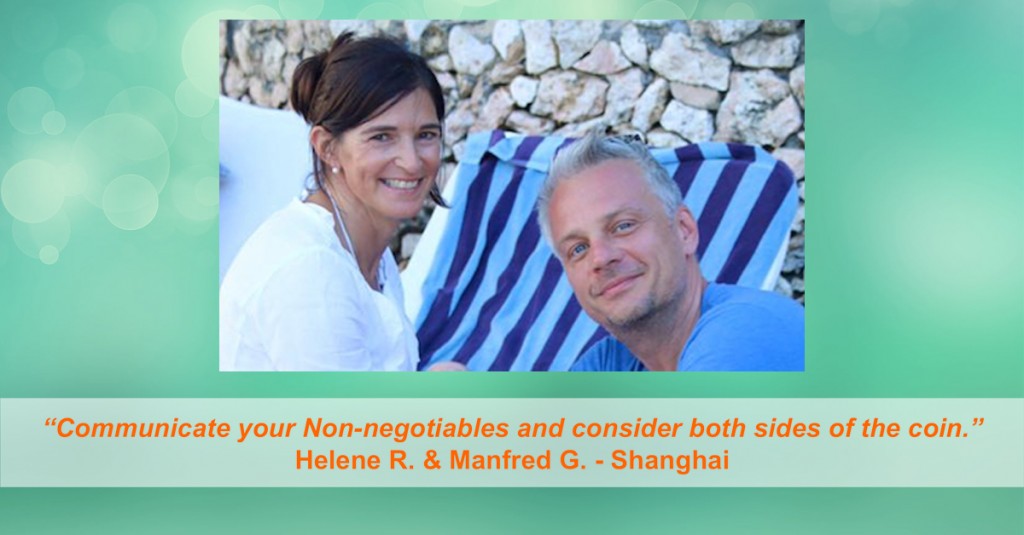 Helene Reiter and Manfred Girkinger are both Austrians, today they live in Shanghai.

Since I started Tandem Nomads, I always wished I could interview both members of expat couples to have the different perspectives represented. But I have to say that for many reasons it is not the easiest thing to organize. I will keep trying as much as I can!

Helene and Manfred’s case is quite a particular one, as they have been alternatively the following partner. I’ve heard a lot of expat couples saying that this was originally their plan to alternatively follow each other but it often doesn’t work out; it often ends up to be always the same one who follows. I was wondering what made it work for this couple. As Manfred mentioned, the fact that they do not have children might have made a huge difference and gave them some freedom. However, when listening to their story, I do realize that there are also many other major factors that made it possible for them, and they both share them with you in this episode.

Manfred was living in South Africa, running a furniture design business, when Helene quit her job and joined him there. After few years, as she explains, Helene felt the need to go back to Austria, so this time it is Manfred who quit his business in South Africa to join her in Austria. After few years, they both started having itchy feet and Manfred had an offer he couldn’t refuse. He was sent to Shanghai as the sales director of a leading company in the aerospace industry. After only a couple of years he became the CEO of this company. In the meantime, Helene had joined him for the second time and managed to build a successful professional path in HR. In just a couple of years, she also managed to become the HR director of the American School in Shanghai. Few months ago, Manfred quit his job, he wanted to go back to study and enrolled an MBA program in Aviation Management. Today, Helene continues to manage the HR department of the American School in Shanghai while Manfred travels between Austria and Shanghai for his MBA program.

Glimpse on Helene and Manfred’s insights in this episode:

Share this:
← TN34: How to answer the question “What do you do?” Stephanie Ward – AmsterdamTN36: How to build a career in your suitcase? With Jo Parfitt – Malaysia. →